It Happened on the Road 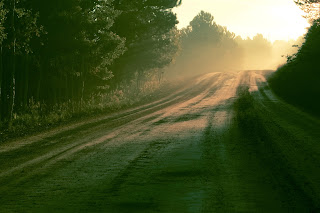 Getting my  thesis draft to this point has been challenging.

At the same time I have had questions answered about the text I decided to write on.  Researching BYU's library provided some sound analysis to help me fulfill my claim about Frost's ability to make us think one way while  he moves us on in a different direction.

This is only a draft.  I still have much to do.  I appreciate and invite your comments to help guide me along this road.


It Happened on the Road

A casual reading of Robert Frost’s “The Road Not Taken” commonly inspires readers to consider taking the “less traveled road.”  Frost seems to support the traveler’s decision with a positive outcome by telling us that his choice has made all the difference.  Not knowing what that difference might be, we are left to believe we will somehow benefit from taking the less traveled road.  We automatically assume it is used less because of its difficult nature and therefore, fewer travelers would choose to put themselves through all that may be expected.  A close reading of Frost’s poem reveals contradictions and irony that lie dormant until the reader takes the time to analyze the effects of Frost’s subtle organization and craftsmanship.  Critics believe every word and phrase of the poem are carefully selected and placed to offer layers of meaning for readers (Hart, Thomas Elwood.  “Frost’s ‘The Road Not Taken’:  Text-Structure and Poetic Theory.”  Language and Style 17, no. 1 (winter 1984):  3-43).
Frost said this poem is an ironic commentary on his friend, English poet Edward Thomas and his Romantic style.  The two were known to have taken walks together in the English countryside.  Though “The Road Not taken” may have been initially written about Frost’s friend, many critics believe the poem could have been a statement about Frost’s own life (Poetry criticism. Ed. Michelle Lee. Vol. 71. Detroit: Thomson Gale, 2006. P. 1).
Frost has warned his audiences about this poem telling them “You have to be careful of that; it’s a tricky poem, very tricky” (T2, 546).  The poem’s trickiness goes beyond satire and levels of irony.  David M. Wyatt believes Frost made surprise a key element in the poem.  By expecting to be offered to help with a choice, the reader realizes that the decision has been made early in the poem by the narrator.  Frost controls what happens in the poem by subtlety guiding readers through the lofty text.  Wyatt believes “the pleasure is in falling for something one didn’t expect to find, in a place one didn’t know one was:  ‘The pleasure of ulteriority.’”
To preserve a sense of wonder Frost is influenced by Emerson’s philosophy that “If you desire to arrest attention, to surprise, do not give me facts in the order of cause and effect, but drop one or two links in the chain, & give me with a cause, an effect two or three times removed.”  This creates a tension between surprise and anticipation that is demonstrated in “The Road Not Taken.”  Frost places the reader in an active role to assume responsibility to critically think through the poem, a burden that generally is expected of the poet.  As readers respond to what Frost encourages, they realize that the choice the poem seemingly promises is actually not delivered.
The title of “The Road Not Taken” indicates this choice, which from the beginning, most readers fail to give up, viewing it as a “fateful taking and a not-taking”  (Wyatt, 1976).  The first stanza supports this response by giving us the facts in the order of cause and effect.  We begin with a traveler coming upon “two roads” diverging, which is nothing out of the ordinary in literature.
Two Roads diverged in a yellow wood,
And sorry I could not travel both
And be one traveler, long I stood
And looked down one as far as I could
To where it bent in the undergrowth;

Few readers are able to resist throwing themselves into this tense moment of decision.  The lines begin to generate a deep yet obscure anxiety.  Readers identify with this divergence or choice by interlacing their own fears and deficiencies.  Being so burdened, they are not sorry to have to linger “long” with the narrator at the fork.  The self-examination leading up to choice is busily at work as we complete the first stanza.  After scrutinizing one road, we believe Frost will allow us to glance down the other road before making a decision:
Then took the other, as just as fair,
And having perhaps the better claim,
Because it was grassy and wanted wear;
Though as for that, the passing there
Had worn them really about the same,

Having completed the poem’s first stanza without being able to make any choice at all, we are catapulted into the next stanza. Believing we were to have a choice between the two roads we are now surprisingly situated in the second stanza, “Then took the other” which gives us an “effect two or three items removed” from a “cause.”  We have jumped from stanza one to stanza three in a single leap.  As Wyatt phrases it:  “The moment of choosing has been overshot—stanza two is missing—and we are already on the road.”   Wyatt believes the aspect of surprise escapes many readers because they fail to stop and analyze what they just experienced.  Our initial apprehension in the poem has just been ignored.  At this moment, however, avoidance may be preferable to choice.  The resulting powerful impression we receive at this stage actually prevents us from truly experiencing this shift. Wyatt explains the elaborate strategy Frost uses to keep us moving:  “in lines six through twelve, the syntax of deliberation masks the rhetoric of equivocation.”  We have missed our chance to examine both roads to determine just how different they really are.
Posted by Dawn at 6/11/2013 07:33:00 AM