While in Hawaii a few months ago, I was able to see the production Ha: BREATH OF LIFE at the Polynesian Cultural Center in Laie.  After spending the day touring the different villages or representations of several Pacific Islands, I learned about many ancient cultures.

We then went to a luau where we were able to eat many authentic foods from the islands while we were entertained by dancers and other performers.  Having had a day filled with Pacific culture and actually being there as part of the setting, we were treated to the play,
Ha: BREATH OF LIFE.

This is a Pacific isle saga with themes of birth and death, triumph and tragedy, and love and family.  As it was night time, the special effects of animation, blazing fire knives and fire were especially compelling.  The animation was woven into the live play as flashbacks, and was intended to tell us what had happened previously. 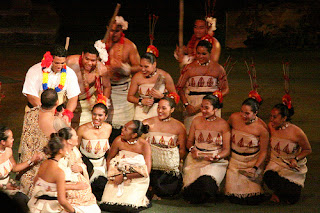 The costumes, songs and dances were designed to captivate the audience and create a connection with the performers.  Narration accompanied by music took the audience on a young man's life journey beginning with his birth and ending with his death.
As we see the joy of his parents and extended family reacting to his birth, and then through his youth, exposition is working on us because we really care about this young boy and his family.  We gain a better understanding and appreciation for the Polynesian culture as we are fully immersed in it.  We are drawn into the horror and tragedy of war with special effects such as fire, thunder and lightening are measured out.  We are joyous when love and family are portrayed and we are sad when death occurs.