My Roots in Poetry's Roots

With a very little amount of experience to formal poetry, the subject was quite daunting to me when approaching the brainstorming process and discussing about it.  In terms of lyric poetry, its brief length can be daunting when considering the often vast amount of meaning that is behind/between the words.  Thus, I decided to start with the arguable roots of modern poetry.  There is no official "first poem" in history, especially since written literary works did not become common until long after literature had already established itself in the oral societies.  A definite turning point in poetry however, is claimed by the great Francesco Petrarca of Italy (born 1304, died 1374).  He wrote some of the first sonnets and today the traditional sonnet is based off of his writings.  He even got his name attached with the "Petrarchan sonnet."

With that history being given, my involvement with it has become a part of my history.  I had my first Francesco Petrarca experience when I was a child as my father is a fan.  To be honest, his work did not become significant to me until I was a teenager. I wish I could say that I found and sought him out without anyone else's influence, but as expected, that would be false.  One day, I listened to an interview where one of my favorite and most respected musicians mentioned Petrarca and his obesession with the one and only Laura, who is the subject of the majority of Petrarca's sonnets sonnets.  In this interview, the songwriter tells the story of his first love and how it was similar to Petrarca's situation.  As a background, Petrarca fell in love, head over heels, love at first sight, the whole shebang, with this woman Laura, who throughout his life never really had any contact with her despite loving her for the rest of his life, even beyond her death.  I found the story fascinating and his very real seeming love really festered at my soul until finally driving me to study his sonnets.

It was the morning of that blessed day Whereon the Sun in pity veiled his glare For the Lord's agony, that, unaware, I fell a captive, Lady, to the sway
Of your swift eyes: that seemed no time to stay
The strokes of Love: I stepped into the snare
Secure, with no suspicion: then, and there
I found my cue in man's most tragic play.
Love caught me named to his shaft, his sheaf,
The entrance for his ambush and surprise
Against the heart wide open through the eyes,
The constant gate and fountain of my grief:
How craven so to strike me stricken so,
Yet from you fully armed conceal his bow!

This sonnet is describing the first day that he saw Laura.  "That blessed day" is code for Good Friday, marking Christ's crucifixion.  This is the one day of the year when people's minds were supposed to be devoted entirely to Christ, thinking of his suffering for mankind.  This is the day of contemplation of Jesus, of spirituality, and all Petrarca is thinking about on this very serious occasion is Laura.  He says, "I fell a captive," and "Love caught me" signifying and foreshadowing this curse of love that is involuntary.  I have always loved seeing people speaking about love as a curse because for the most part I am in agreeance (this idea can be seen in mythological Cupid who cursed victims throughout ancient history).  Today, many would say that what Petrarca was experiencing was not real love, but more infatuation and this is where I disagree and connect most with Petrarca.  I feel that what he felt for Laura is the epitome of true and pure love, untainted by another's (Laura's) selfishness that all human's are guilty of.  That being said, I also consider this love to be torturous and holds its victims captive.  I have been a possessor of this feeling towards someone I did not know at all except for my observances of him, once in my life, and it was during the time that I discovered Petrarca and upon reading him, I felt his words were my precise feelings written on paper. 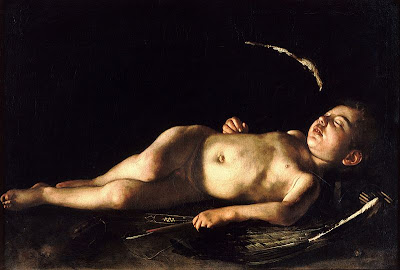 Sleeping Cupid by Caravaggio, 1608
From what I have interpreted, Petrarca was selective in stating that it was Good Friday when he was first exposed to Laura's wrath on his heart.  He knew he was supposed to be lifting himself up to God, but instead was staying down in the realm of Laura. It is nearly impossible for me to not get caught up in something that I feel so strongly for, being a person or a passion.  I admire his struggle to balance this with focusing on God, even though the prior wins out.  He was aware that he should have been thinking about Christ's sufferings for him and felt guilt, but nothing could get in the way of this great love. 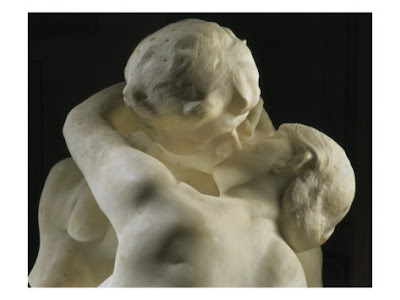 The Kiss by Rodin, 1889
This is by far the most romantic piece of art I have ever seen

For a poem about a woman that Petrarca was in love with, I always noticed that there were many more "I's" and "me's" than there were "she's" and "hers."  If he is so in love with her, then why is he talking so much about himself?  His exploration of the love was never focused on the actual Laura and her well-being, but rather himself and his feelings.  As stated, I was a teenager when I first experienced Petrarca, so self-exploration and self-discovery were essentially the main occupiers of my thoughts.  Even at any age, it is something I think all of us often focus on and like to be aware of.  Some call it selfishness, but I prefer not being a slave of the ignorance of myself.
Posted by Caitlyn Pearson at 5/14/2013 02:39:00 AM