Let's go to the THEATER

Tonight I saw the musical, Urinetown, and boy let me tell you what a treat it was to go to urinetown (that is, err, in a figurative sense).  Bad jokes aside, it really was well worth the $16 I spent to see it.  It was put on in the small and cozy Hale Theatre in Orem, UT and is running through June 15. Get your tickets here. 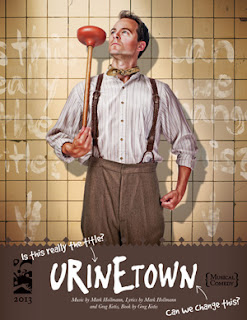 The work gets its title from Urinetown being the place where people who "relieve themselves" in public go after being caught, as it is against the law.  In this society, people must pay to use the restrooms, if they don't have enough money, then they simply can't go.  Urinetown focuses on several people who are living in the poorest part of town and often do not have enough money to pay. Eventually a rebellion starts and yada yada yada. Again, go see it.

For starters: the music was catchy, the cast holds great singers and actors, and the themes were powerful.  I would say that these three combined always make for a pretty decent show.  The stage was very small and there was not really a specifically built set aside from a few signs and painted walls.  In actuality, I feel this minimalistic set design brought the audience's attention to the dialogue as opposed to getting lost in visuals (which can also make for a very respectable production).


It is an extremely energetic play.  There were several dance numbers that contribute to this conclusion, my favorite being the "cop song."  The acting also plays a part in the musical's power.  You'll see that every character is at least on the brink of instability and chaos in at least one point in the play.  This keeps the audience on edge and when the characters do finally "spill over," it is long awaited.


Here's the best performance I could find online: