Memoirs of a Teenager

Model yours after whatever memoir/biography you choose. P.S. the tone should be reminiscent and make sure to not hold back too much; autobiographies are very open!

In order for me to speak about my familial relationships and social media's impact on them, I must first discuss those relationships states'.  I have an older sister and two parents, all of whom are nice and good people, but we're not all nice and good people towards each other, more so in the past.  My sister and I have a seemingly above average amount of problems and differences, which have, as one can imagine, weakened our relationship over the years.  Social media has not helped the issues.  We are on again, off again Facebook friends and I honestly do not know why.  Every few months, she will add me, and then delete me and this process has been recurring since I first got my Facebook in 2008.  I believe the first time she deleted me was because I left my Facebook open on the home computer and my parents were able to access hers and discovered new and enlightening pictures about my sister's extra-curricular activities to their disapproval.  As a result of years of being deleted from her social network, I have this bitter taste in my mouth everytime I discuss Facebook and my sister.


Around my senior year of high school when college was fast approaching, my mother expressed her desire to join Facebook so that she would be able to keep up with what I was doing once I left home.  I also agreed that she should get one as it would make it even easier to communicate.  I also, however, understood, that there was this looming sense of distrust crowding her new-found desire and it upset me.  I had done nothing for her not to trust me, but I understood her paranoia because of her Facebook discoveries of my sister's life.  I still, though, could not help but being somewhat bothered by her underlying intentions.

Although, my social networking experiences with my immediate family have not gone over so amazingly, I find as a great in terms of my extended family, most of whom live out of state.  We have been able to keep in touch as we all grow older and establish lives for ourselves.  I feel that the past generations did not have the same means of facilitated communication.  I have not seen my cousin Stacie in a few months and due to chaos and bad timing at our other cousins farewell two weekends ago, we didn't have the chance to say hi to each other, so I posted the following on her Facebook wall: 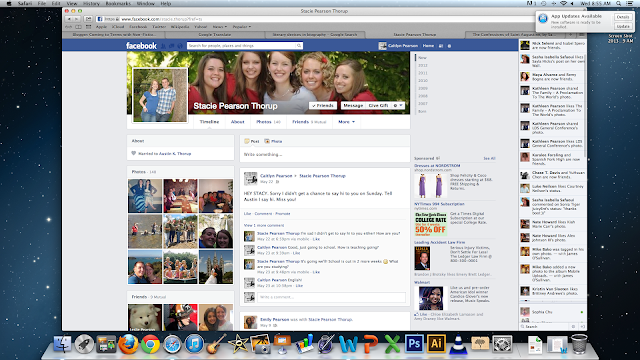 Now I know that I most likely would not have called or texted her, so the fact that we are in each others social network makes for a more casual form of communication with more minimal efforts.