Human Frailty (The Philadelphia Story and The Importance of Being Earnest)

When Dr. Burton suggest we compare The Philadelphia Story and The Importance of Being Earnest, I was thrilled.

I saw a production of Holiday at BYU last November, and it was spectacular. I decided that this was a playwright I wanted to get to know better. His probing of societal expectations in the 1920s and '30s had a lot of resonance today, what with the financial crash of '08.

I promptly bought The Philadelphia Story, a film adaptation of another of Philip Barry's plays. It has a dream cast: Katharine Hepburn, Cary Grant, and Jimmy Stewart.

The two men battling (at times) for Hepburn's affections come from different social milieus: the "high line" Philadelphia society of Grant, and the wisecracking everyman of Stewart. I won't spoil the plot too much, but let's examine the following exchange (Grant plays Dexter and Hepburn plays Tracy):

Dexter: No, Red, not of you, never of you. Red, you could be the finest woman on this earth. I'm contemptuous of something inside of you you either can't help, or make no attempt to; your so-called 'strength' - your prejudice against weakness - your blank intolerance.
Tracy: Is that all?
Dexter: That's the gist of it; because you'll never be a first-class human being or a first-class woman, until you've learned to have some regard for human frailty. It's a pity your own foot can't slip a little sometime - but your sense of inner divinity wouldn't allow that. This goddess must and shall remain intact. There are more of you than people realize - a special class of the American Female. The Married Maidens.

"Human frailty" is also a concern of Oscar Wilde's. (As to making learning social,) my boyfriend and I read the exchange between Algernon and Cecily about their so-called engagement. Where Barry as playwright brings a more melancholic or ambivalent tone, Wilde seems to revel in the ridiculousness of the upper classes. Some of this can no doubt be attributed to setting: the Gilded Age was a lot more heady and carefree than 1940 (the release date of the Hepburn film), with the shadow of Hitler's invasion of Poland. (Godwin's Law.) 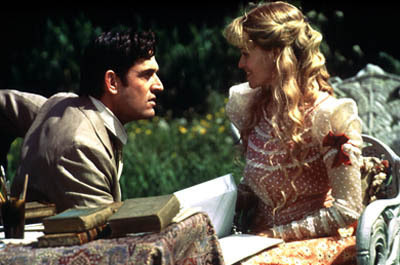 I'd argue that, in fact, Holiday is the work with closer resonances to Earnest. Both concern a man torn between keeping up appearances to fit in with the upper class (from which he is not ultimately derived) to win the heart of the woman he loves. Both eventually get the girl when they let their guard (and class!) down to embrace their true nature. Both were written in inherently more optimistic, freewheeling times than The Philadelphia Story, which is ultimately conservative re: the status quo.


Algernon: Lane's views on marriage seem somewhat lax. Really, if the lower orders don't set us a good example, what on earth is the use of them? They seem, as a class, to have absolutely no sense of moral responsibility. (I.17)