OH How the Time Flies

Time Flies when you're having fun, right?! Err, or rather learning? Either way, the time has indeed flown by.  I started out this expedited semester with eagerness to learn and also fear for what was to come.

And 3 weeks later, I have to say I have learned loads of new interpretive methods, and have also overcome many loads of fears. Do you see the repetition there? Just one of the many literary methods.

My first reference to the five learning outcomes in a blog post was through a philosophical analysis of literature where I discuss "explor[ing] the evolution of literacy and literary formats," or the fifth learning outcome.  Next, I discussed the analysis of poetry and putting the intimidation behind me in this post.  This was my learning plan on how to move forward despite my fears and hesitations.  I again discuss overcoming my poetic fears in my personal literary narrative, and I feel that you can see my forthcoming analysis skills, obviously with much more learning to be learned.


Another example of self-directed learning is in my analysis of a poetry adaptation where I discuss how I reached the point where I was finally able to interpret.

In terms of social learning, I really appreciated Charly's comment in response to my opinions of 1960's culture.  She helped inform me that I was possibly playing into moral stereotypes of the time too liberally.  We were able to bring a current form of media into the conversation, that being the television show, Mad Men.  I do agree that morals were looser than many of us think today, but by my response comment, I feel that I was able to relay my thoughts clearly.  I also enjoyed the several comments on my personal literary narrative.  I know that if I were to formulate that post into a paper, I could definitely use the ideas stated in the comments to brainstorm and get myself thinking on a deeper level.

Also, on my goodreads account, I was able to connect with associates, and I now have 28 friends with whom I can now discuss literature!! 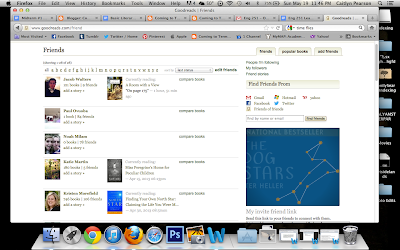