Through fearless blogleading, train reading, Goodreads using, and pushing my own limits (poetry! Díaz! sharing personal experiences without the protection of an anonymous handle!), I have learned more than I expected to given that this is more of a cap- than cornerstone of my college career. 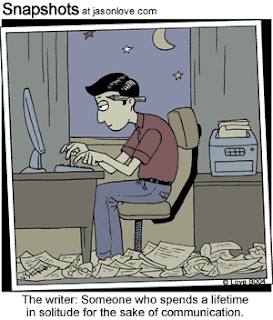 I've run with the idea of highlighting literary terms in our posts. I believe this has led to both more engagement in my writing, as well as helping prospective readers know if it's a post that'd interest them. Between this class and my fiction writing class, I have been paying much, much closer attention to the nuts & bolts of rhetoric. This led me to using a green pen to pick out dialogue verbs in Malamud. If I'm marking the text, I'm more engaged with it.

In my post on feminist critical theory I mentioned the several hours I spent reading chapter 36 of the Cheuse & Delbanco. After my study abroad in Paris, I took French Literary Theory, which as someone who presumably went to college in the '80s/early '90s can attest, is all PoMo, all the time. I could understand it intellectually, but didn't care for it personally. Reading even these relatively brief excerpts of various theorists was a real aha moment for me: not all CritLit has to be boring! (As far as engaging socially, my childhood best friend and I ran into each other in the HBLL, and had a great discussion on Danielewski. Metafiction: bringing friends together since the twentieth century.) I have read more of Borges', Nabokov's, and James, William's (forthcoming post) nonfiction in the past three weeks than I had in my life. That can only be a good thing. I'm really enjoying the Essayist of the Day series. It's not only fun, it expands my reading list, forces me to explain things in terms other people can understand (a challenge!) and ideally helps the group get an idea what non-fiction can do as a literary genre.

Spring is interesting, because it's like swallowing from a firehose. You weren't joking when you talked about the courseload: if anything, ten hours outside class per week is probably on the short side. When you said our initial reading assignment would take two hours, it easily took me three, not to mention bloghours. And I'd consider myself a fast reader.

What this perpetual orgy of literature has given me is breadth that I wouldn't seek out on my own. The class is feeding my bookbuying addiction, as I posted on Facebook: besides the text, I've already bought a Bantam version of the Sonnets and will probably spring for the Borges. I have tried to balance my posts between non-fiction and flavor-of-the-week. Outside the assigned reading, I have had the opportunity to read Stegner, Shakespeare, and the wordsmith Students of BYU. I have learned new things, like the rhyme scheme of a Petrarchan sonnet, what a syllepsis is, and how ancient Grecian tragedy was performed. I started out moderately skeptical that I would learn anything new (I like writing courses more than Englishy-English ones, and have almost exclusively followed that track in my minor), but I was happily proved wrong.

Persuasive writing is my favorite of the outcomes. I have striven to make every post argumentative, and not merely informative. Without the "so what?" statement, why bother reading? This no doubt comes from my background as a magazine journalist, active online Q&A blogger (part of a collab site hosted by BYU with thousands of readers), and future tech writer. I'm not in love with overly "academic" writing for its own sake. What has impressed me about the Essayist OTD project is how accessible these writers are. They're intelligent, they discuss literature on its own terms, but it doesn't put you to sleep. If you think about it, a film critic has to do the same thing: navel-gaze about insidery jargon too long, and you've lost your audience. As I said in my initial (super awesome, no doubt) Self-Directed Goals post, literary criticism matters.

I've hence argued that Updike is a misogynist, that Fitzgerald employed simile to evoke the hard-to-pin-down reality of clinical depression, and that Apollinnaire's sound choice was no accident. I'll let you be the judge of whether I'm on my way to a career as one of The Smart Set, but using actual rhetorical tools rather than vague impressions has, in my opinion, sharpened my argumentative writing.

I've hemmed and hawed what to put forth as my Personal Literary Narrative. (I was inspired by Burton's post on Neruda before we even discussed it in class, and quickly threw up a brief post on my first teenage encounter with Apollinaire's poetry, followed by assonance analysis.) However, I would actually like to submit for consideration by the academy my "razed oblivion" post on Sonnet 122. In it, I weaved a close reading and translation of the sonnet with a personal anecdote about my father, my late mother, and myself. This was difficult for me (as my mother died only seven months ago), but hey, poetry is a decent way to chop away at those emotions.

My Poetry Adaptation was super fun. It's basically a prose poem. It was a kick to research Twitterature, read the Pentametron and Rahm Emanuel, and create a year in the life of a #BYU student. Briggs was kept on the edge of his seat. I don't have a personal Twitter account, but I think this poem will help me expand on using & appreciating it as a literary genre in continuation with the French Dangerous Tweets projects I discussed. (I could ask permission of Dr. Olivier to send you the PDF if you're interested: it's in English and was an awesome use of new meets old media.)

I've enjoyed the repartee of my comrades, and it was hard to narrow down the best social interactions so far. I'm going to have to go with Updike, Appolinaire (doesn't look like a word anymore), and Borges.

"Updike as Misogynist" inspired Kimara to write about her views on Updike and ethos. Kimara is unfailingly kind, responsible, and always goes the extra mile to contribute. Jamie and I really click in terms of liking each other's posts: she has always given me a lot to chew on in her own writing and her thoughtful, hilarious responses to mine.

"the days go by..." brought out our closet Francophiles. ("You would post a poem in French. Brilliant." quoth Jamie.) Using literary terms we've discussed (assonance, sound value), it was fun to hack away at what makes this poem about the Mirabeau Bridge work, to psychoanalyze a bit about why it hit me so hard in high school. The reviews are in, and everyone loves a post on Paris. I've been able to talk to Caitlyn and Sined about our love of the French language during vending machine runs or before class. Success.

"EOTD: BORGES" got Joceyln, a semi-pro blogger herself, Jamie, and you, Dr. Burton, to respond, and I was (she admitted modestly) very pleased. I've decided to definitely "assign" to the class this essay for reading: at only about three pages, it makes one of the best poetic arguments and takedowns of Sapir-Whorf and romanticization of the Romance (trust, as a French major, I've heard every argument from the Academie to random people on the streets about the celestial glory of the French language). This is a post I believe could be the germ of a much larger essay about sound values, poetic traditions, and vocabulary inventory. Talking about English=pentameter and French=hexameter in class was such as geek-out moment for me. In fact, I think there's a thesis lurking in there, that's how fascinating I find it. To the dashboard!

I was pleased to be selected as a blog leader, and have constructed a series of Metaposts that will hopefully give useful tips and tricks, as well as facilitating our mediated learning. My leadership position for our presentation is evident in this metapost. I'm glad we can bring different skills together (I like organizing things, Jamie is very web-savvy, Dallin is well-read in genres outside my own, Kimara can bake, and so forth), and monitoring our baby is something I like to do. It's interfered with my sleep, but I have continually monitored both the NF blog and the three others. Some outside-the-group bloggers I've been impressed with are Lindsey (she has my favorite writing style in the class), Clarissa, and Sined.

I like html, and have learned useful tips for embedding links, resizing photos, changing font color, and most-life-changingly, how to properly use html in blogspot comments. (Sniff ... I'd like to thank the academy, and Dr. Burton, for making this possible.) The visual format of my blog posts is very, very important to me, and I have been tracking the blog using blogger's suite of tools and Google Reader (RIP as of 7/1.) I am not a naturally visually-oriented person. (I find the text, for instance, to be horribly distracting, like it's the internet, but printed. I actually would take a wall of text any day, and have remedied the problem by using older, less hip editions when I can of the assigned short stories and poems.) However, I was an early adopter of blogging (I probably hit the sweet spot as a 25-year-old, there: the married mothers of adult children came too early, and the 19- to 21-year-olds in the class are probably bigger users of microblogging platforms such as Tumblr, Pinterest, Twitter, &c.), and man, my posts look so much better than they did as a college sophomore. Web writing is going, in my opinion, to a more minimalist aesthetic, influenced by the industrial design of Google and Apple: fortunately, gone are the days of horribly cluttered, difficult-to-navigate sites with horrors like Papyrus font.

I normally dread group work, as I'm an independent person. However, I really have enjoyed this eclectic melange we got goin' on: young, not-so-young, married, single, childless, grandmothers. I'm not an internet millennialist and do not think that the grand visions of the Internet linking mankind into a harmonious, kumbaya are realistic. However, it's not nothing that six people from such different backgrounds and life stages have been able to come together to create something worth talking, thinking, and writing about. Of all the things related to this class, a post that Dr. Burton plus-oned on Google Plus (that's a thing? :) ) has stuck with me the most. It's the tale of the guy, my age, who was off the Internet for a year. His ultimate conclusion was that it didn't bring him the Thoreau-esque zen joy he had thought it would. The Internet, to paraphrase him, is essentially people, connected to one another.

Considering that I will be moving 1,500 miles away faster than I can even catch my breath, I think that's something worth considering. I still think that I am too plugged-in, and I need a breath of fresh computer-free air now and then (so many tabs) to feel fully human. I still have real concerns about technology and education, both at the university level and before. But...

Web writing, like the best writing across the world and ages, is ultimately about bringing people together.

Email ThisBlogThis!Share to TwitterShare to FacebookShare to Pinterest
Labels: coming to terms with college, midterm 1, personal reflection, posted by Charly