This now makes the third time I've been assigned "A&P," and can't say that I like it any better now than in high school. A tight dénouement? Sure. Vivid diction, like the "two scoops of vanilla" Indeed. But his not-even-subtle misogyny makes me uncomfortable, like an overhead locker room conversation I wasn't supposed to hear.

I'm not the only one to have observed this tendency; in real life, Updike divorced the wife he married at 21 years old and with whom he had four children.

I just have a hard time enjoying the writing of someone who comes across as such a dou jerk. It's among the reasons why I'd take Voltaire over Rousseau any day: Rousseau was a callous, heartless man who abandoned his kid, obsessed with morality but apparently unable to use a shred of it. Voltaire was essentially atheistic, but sensibly never married, and was unfailingly kind, generous, and responsible.

Katie Roiphe has a solid essay on Updike in the essay collection In Praise of Messy Lives. (I like it enough that I think I will assign a selection from it for our group during non-fiction week.) 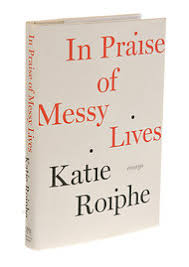 Here's a tidbit of what she has to say:

Updike offers his own engaging mea culpa about his relation to women in a poem: "I drank up women's tears and spat them out / as 10-point Janson, Roman, and Ital." ... From the beginning, Updike wrote about trying to defeat death or mortality through affairs, through the intensity of sex, which is one of the things David Foster Wallace in particular criticizes him for. ... This sense of using sex, or the creation of many lives, through affairs, and mistresses, transcending the limits of one small, suburban existence through sex, runs through Updike's writing from the beginning.

The printed word, the very typography, as a type of larceny. I'm going to jump on the DFW bandwagon and say that Updike's misogyny robs his prose of redeeming value, and that it actively infected the 1960s consciousness for the worse.