my stab at the personal essay

Physical landmarks often mean little to me. (This is evidenced by the fact that I have been a passenger dozens of times coming out of Parley's Canyon, but I couldn't tell my friend when to get off.) No, I track my life by the books I was reading at the time.

Moving into a new house was marked by The Chronicles of Narnia series. It was probably a year after, when I was twelve. I had a white shirt with flowers from Old Navy, and blue shorts, and it was June, because the image about it being as bright as stepping out of a garage in June stuck out to me.

In ninth grade, I was reading The House on Mango Street the day I signed up to audition for The Nutcracker. I was a soldier that year. Which means that I was 4'10", yet in high school.

At Girls' Camp, I was reading Sense and Sensibility when one of my peers was complaining of her omnipresent migraines.
I know I read the Book of Mormon the summer before my Senior Year, because I plowed through the Alma war chapters and Helaman while in South Dakota, visiting Mt. Rushmore. I was none to keen on that trip--for once, I had been invited to a friend's house (MCB's,[1] no less--even if it was a Seminary function), and I was stuck in the boondocks. The drama of 3 years ago--heh heh.

I remember getting a haircut at SuperCuts I was not particularly fond of. I knew it was in high school, but didn't realize it would have been Spring Term of my Senior Year until I remembered I was reading The Member of the Wedding at the time. Ah, Lit of the American South--I don't think anyone was too fond of that class. It was probably the week of "Spotted Horses, " that JVA[2] broke down and exclaimed, "Hasn't anybody read?!" All eyes turned to MCB and me. Ha; not even we had finished it. JVA stormed out, telling us he'd return when we had actually read.

Freshman year, I re-read Anne of the Island. That was the week I lived on Turtle Supreme cookies. I ate them after coming home from the park, having finished the book. That would have been Fall Semester, because I had a "may I offer you the shelter of my umbrella" experience that semester, with one of the guys in my Shakespeare class, outside the JFSB.

Last summer, Emma coincided with my time as a Games Coordinator, because I read it under the pavilion at Kiwanis Park, waiting for my coworkers to show up.

It was A Tree Grows in Brooklyn in the work truck, going to help put on insulation, at the very end of last year, not wanting to listen to my dad.

I suppose when I look back on this epoch of my life, I'll remember reading Mere Christianity at a boring concert where I expected free catered food (that's what the flier said--not gross Costco food you had to pay extra for!), and Ring of Words in line for Laugh Out Loud, or Old Goriot on the lawn by the Fishbowl. Reading's not just something I do in one set place, in private, but weaves in and out of all places and events in my life. You know when Belle's walking down the street, oblivious to the bustle of life about her? That's me. 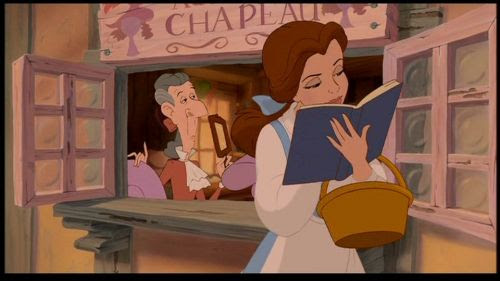 [1] My inscrutable acronym for my high school crush.
[2] My high school literature and American History teacher, who attended Woodstock and lost his Doctoral Thesis from the top of his car. Separately.
Posted by Charly at 5/25/2013 12:56:00 AM