Poe did it again!

Long ago, I remember being horrified by the works of Edgar Allan Poe.  When I first heard "The Tell-Tale Heart," I honestly thought it was my heart that beat so loud.  Reading "The Cask of Amontillado" brought back vivid memories of wondering how any human being could create such dark, twisted stories.  However, there was something about "The Cask of Amontillado" that caused me to think of Brer Rabbit, who always succeeds in outwitting his arch-enemy, Brer Fox through deceit.
Finding Fortunato's weak point, his pride on his connoisseurship in wine, 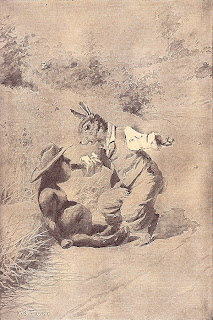 Montresor led
his friend
down. . .

into the deep, dark catacombs all the while assuring Fortunato he could call Luchresi instead to test the Amontillado, giving him ample opportunity to back out. Like Brer Rabbit tricking Brer Fox into rescuing him from a well with the lure of a block of cheese, Montresor tricks Fortunato into the vaults with the lure of Amontillado.  There is a the possibility that Poe, an American writer, tapped into African American folklore, the source from which Brer Rabbit originates.

This connection added yet another sinister dimension to Montresor's depraved mind.  He was a trickster - a weak and amoral character.  Just perfect for an Edgar Allan Poe story.